The history of Burano Lace is lost in the misty nights on the lagoons of legend and poetry.
The legends about the birth of this art have one thing in common: the sea. They are simple fairy tales, inspired by the life of fishermen and the wonders of the sea and of course, by love.

One story tells of a young man in love who was fishing off the island of Burano, in the lagoon of Venice, when his boat was surrounded by a group of mermaids who began to sing a melody so poignant that the young fisherman was bewitched and about to throw himself into the sea to follow them, only his love managed to stop him.

When the mermaids realized that the fisherman’s love was stronger than their magic, they came out of the water and gave him a sign of their deep respect: a delicate moss embroidery. The fisherman took the gift and brought it to his beloved, who loved it and made a lace copy, giving birth to the tradition of Burano Lace.

Beyond the legend, lace was widespread in Venice at least since the fifteenth century, when the Dogaressa Dandola Malipiero founded her first real school.

In the following century, Venice became one of the world centers of this craft, guided by noble women who provided space in their palaces for embroidery laboratories and schools.

The activity of lace making was then extended to hospitals, hospices and all those institutes, most of them directed by the religious, which offered hospitality to young people, who learned the trade and paid the expenses.

In the seventeenth century there were very important centers of lace production: the Hospice for young people of Giudecca and the convent of the nuns of San Zaccaria.

The production was largely controlled by the members of the merchants’ guild who ordered and collected the finished products.

Then the production of Venetian lace, both needle and spindle, experienced a major crisis in the second half of the seventeenth century due to the intensification of competition from French manufacturers, structured in a much more modern and productive way, where many Venetian lacemakers were employed.

The Serenissima government tried in various ways to defend this important craft sector, prohibiting the expatriation of lace stores and granting privileges to local manufacturers, but nothing could stop an inevitable decline, so much so that in Venice itself, embroiderers ended up imitating French stitching.

Towards the end of the XVIIIth century and throughout the XIXth century, lace almost disappeared from clothing.

After centuries when lace represented an important resource for the whole lagoon area, during the long period of decadence between the XIX and the XX century when Venice lived in the shadows, the art of the lace gradually disappeared from the islands.

It was not until the end of the nineteenth century that the art of embroidery flourished again, especially thanks to the love and commitment of Countess Adriana Marcello, who defended the school and the experience of a great teacher, Cencia Scarpariola, authentic guardian of the secular technical secrets.

Excursion to the islands of Murano, Burano and Torcello

Duration 6h- Every day, Guided tour in English, visit the famous Venetian islands of Murano, Burano and Torcello and discover the handicrafts such as the glass workshops and lace making

Excursion to Burano - Murano - Torcello from Venice, a great triple-island 6h daytrip through the Venetian Lagoon with a local guide : €21

In the 16th century the lace makers of Burano invented the stitch that made this lace so famous: “The Punta in aria” Literally “the point in the air”.

It is a needlepoint that, by playing with transparency and relief, allows for the creation of both figurative motifs borrowed from nature (plants, animals), and more abstract or geometric shapes.

The lacemakers work on a kind of small short bolster, equipped with a wooden cylinder, placed on their knees: the “tombolo”.

It is on this support that they pin the motif’s design.

Be careful, a lot of cheap lace is sold in Burano too!

To see the best, and to discover the work of the real Burano lacemakers, go and visit the “museo del Merletto“, piazza Baldassare Galuppi, 187, Burano.

Here is a small selection of stores where you can find real Burano Lace:

Emilia’s house is a store and workshop that has made Burano lace for three generations. The master craftsmen make lace in the traditional way; an art passed down from generation to generation as a family heirloom. A small museum upstairs displays antique lace pieces and collections of 16th and 17th century wedding dresses. Today the workshop combines ancient tradition with modernity by creating linens and tapestries for very large hotels around the world, and of course for Venetian palaces.

Bustiers, lace dresses, and lace skirts, but in today’s fashion: traditional white and ecru lace but also beautiful colors.
Calle san Mauro, 307/309, Burano Open every day from 9:30 am to 6 pm

At Martina Vidal’s store, you can see a Burano lacemaker at work. 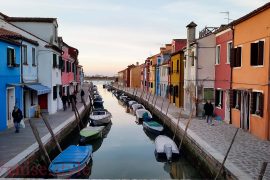 The Charm of Burano and its Colors 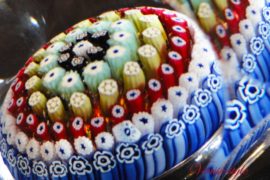 We use cookies on our website to give you the most relevant experience by remembering your preferences and repeat visits. By clicking “OK”, you consent to the use of ALL the cookies. However, you may visit "Cookie Settings" to provide a controlled consent.
Cookie SettingsOK
Manage consent

This website uses cookies to improve your experience while you navigate through the website. Out of these, the cookies that are categorized as necessary are stored on your browser as they are essential for the working of basic functionalities of the website. We also use third-party cookies that help us analyze and understand how you use this website. These cookies will be stored in your browser only with your consent. You also have the option to opt-out of these cookies. But opting out of some of these cookies may affect your browsing experience.
SAVE & ACCEPT